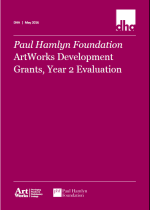 Following the end of the ArtWorks initiative, Paul Hamlyn Foundation (PHF) has continued to fund a range of activity to explore how artists could be better supported in developing their practice in participatory settings. In 2013, as part of the initiative, PHF funded seven projects through small development grants; in 2015 PHF decided to fund a further group of six projects, all with activity taking place between July 2015 and March 2016 (and some with activity continuing beyond this time). Each of the projects has received between £3,200 and £3,500. In addition, Creative Scotland funded a project which had applied through the PHF funding process, at a similar amount.