Throughout this report, Paul Hamlyn Foundation’s survey results are compared to CEP’s broader dataset of more than 40,000 grantees built up over more than decade of grantee surveys of nearly 300 funders. The full list of participating funders can be found here.

PHF chose a set of 12 other funders to create a smaller comparison group that more closely
resembles PHF in terms of scale and scope, including five European funders.

Foundations make different choices about the ways they organise themselves, structure their grants, and the types of grantees they support. The following tables show some of these important characteristics. The information is based on self‐reported data from funders and grantees, and further detail is available in the appendix. Compared to grantees of the typical funder, PHF grantees are smaller organisations that are more likely to be first‐time grant recipients of the Foundation. PHF also awards larger, longer grants than the typical funder. 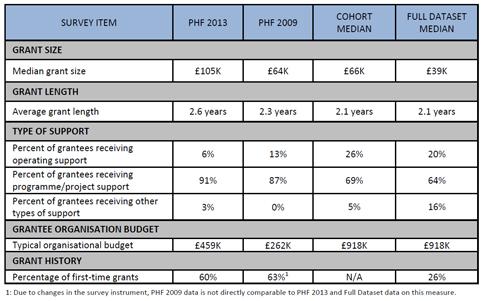