This review shows that the Paul Hamlyn Foundation is making good progress against the three core aims of its Strategic Plan. But it also finds that the Foundation needs to re-focus its efforts around the two supporting aims of research and capacity building.

The Strategic Plan has ushered in profound changes in the scale and nature of the Foundation’s giving and in the way in which it operates. Annual giving is now £18.6 million, with a 60:40 split between Open Grants and Special Initiatives. A root and branch re-structuring of the organisation was introduced at the outset of the plan based on four programme areas with their own heads, programme committees and external advisors. Four new trustees have further increased the width and depth of Foundation’s expertise.

The Strategic Plan commits the Foundation to making an impact not just on the lives of individuals and on the organisations it supports, but across the fields in which it operates by changing policy and practice. Where this higher level of impact is concerned, much is expected of the six Special Initiatives launched as part of Plan over the past three years.

The Foundation’s peers and partners see it as a rigorous and imaginative grant-maker and as an important force for change in their spheres of work. This view is backed up by the Foundation’s own reporting systems which record that 75% of its Open Grants are meeting their objectives.

The over-arching story of the Strategic Plan is the attempt by the Foundation to transform itself from a traditional grant-giver into a strategic philanthropist. It appears to be making great strides in this respect. But this level of ambition is bound to stretch and challenge an organisation. The Foundation is consequently learning valuable lessons about how best to support the pursuit of its core aims: the design of Special Initiatives, the relative merits of innovation as a criterion for investment, the role of research in increasing impact and the importance of capacity-building as part of the grant-making process. Putting these lessons learned into practice in the second half of the Strategic Plan will help the Foundation to realise still further the value of its investments.

While progress is good, the real test of the Strategic Plan will be its success in achieving radical, long-lasting change in the fields in which it operates; in other words at the level of policy and practice. There are some signs of this happening but it is still too early to say in many cases – and may even be at the end of the period covered by the Plan. Meanwhile greater attention is needed in the next phase on gauging the impact the Foundation is trying to make, supporting its investments and capturing and sharing the learning that goes on within the organisation and more broadly with the organisations it supports, works with and is attempting to influence.

Our previous approach was about breaking down barriers. We’re now much more ambitious and our approach is to try to deal with the causes of problems and to grasp opportunities. 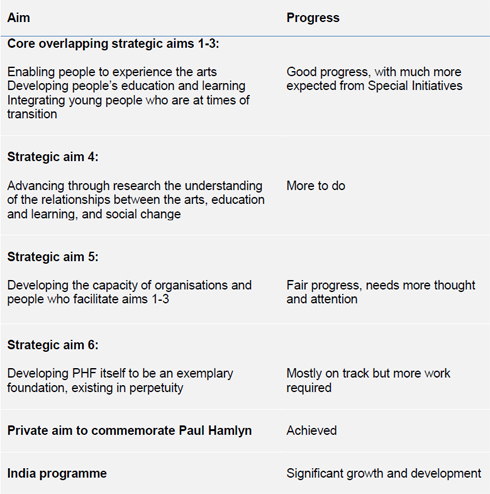