The Special Initiatives and Open Grants are all clearly in line with and contributing to the pursuit of these three core aims. There is a fairly even spread of grants across the three UK programme areas. Staff and advisors report that there has been a considerable improvement in the quality of applications under the Open Grants Scheme over the past two years. This is attributed the depth of engagement in the particular programme areas, but also the new more rigorous two-stage application process. Though the three main programme areas are operationally distinct – and summarised individually below – they contribute collectively to the achievement of the three core strategic aims of the Plan. The Strategic Plan introduced a considerably broader approach to funding in the arts area, so this was effectively a new programme area in 2006. The Foundation has worked hard to expand its reach in terms of arts forms, age groups and geography. It now has a ‘mosaic’ of investments across the UK, plus a flagship Special Initiative in the form of the Breakthrough Fund. The Foundation’s well-established Awards for Artists and the Jane

Attenborough Dance in Education (JADE) fellowships are run under the programme. Two further Special Initiatives are in the pipeline: Artists Working in Participatory Settings and Participation in Museums and Galleries. Projects tend to break down into three main categories: improving and/or expanding provision, improving access (largest category) and building capacity (mostly through the professional development of artists or teachers).

There is a considerable number of projects in the other programme areas which also contribute to this aim.

To support innovative ways of supporting people’s education and learning

Strategic aim 3: Integrating young people who are at times of transition

Social justice was set up as a new operational programme area in 2006 – though social justice has always been a core concern of the Foundation. It is a much broader and less well-defined area than its sister programmes. Nevertheless PHF has succeeded in establishing a presence in a number of new areas in a relatively short period of time: notably mental health (through the Right Here Special Initiative) and criminal justice, as well as building on its previous work the area of refugees and asylum seekers. The Reading and Libraries Challenge Fund pre-dates the Strategic Plan, but the lessons from this strand of investment have been influential in the design on Right Here and the Foundation’s broader thinking about social innovation. A large proportion of projects funded through the Open Grants in this area are either delivered through arts organisations or make use of arts-based approaches.

Right Here is the largest Special Initiative. And it is the most sophisticated in terms of the processes used to research and develop the proposition, the number of partnerships and its approach to capacity building and evaluation.

Strategic aim 4: Advancing through research the understanding of the relationships between the arts, education and learning, and social change

While the Strategic Plan makes it clear that PHF is unlikely to commission ‘stand-alone research’, there has been very little formal research in areas where three programmes overlap. One example of this is the review by Loughborough

There is much more research activity, mostly in the form of evaluations and reviews, going on within the individual programme areas. The Special Initiatives are developing increasingly sophisticated approaches to capturing and spreading knowledge. For example, the SPEAK (Strategic Planning Evaluation and Knowledge Networking) approach with Right Here, which links formal and informal ways of learning and advancing understanding.

Stakeholders strongly expressed desire to be more actively involved in knowledge sharing with the Foundation; not just within the three programme areas but about how social change is achieved more broadly (this is a key objective for the Foundation under this aim). The Grantee Perception Report found that grantees are equally eager for the Foundation to connect them with each other and to pools of knowledge and expertise.

Staff, advisors and stakeholders recognise that a great of learning is taking place around the Foundation’s programmes. There is widespread agreement that capturing and spreading this, and relating it to questions of improvement, rather than doing ‘research’, should be the Foundation’s main concern going forward. There is a major opportunity to apply the kind of structured and focused learning and improvement found in the Special Initiatives to the work of the Foundation as a whole (see below for more analysis). This thinking is captured in the recent internal document Towards a Research, Knowledge and Improvement Strategy as well as the recently prepared Communications Strategy, which sets out a clear plan for opening up channels for shared learning and increasing the Foundation’s influence on external agendas.

Breadth of research: ways in which PHF is advancing knowledge and understanding 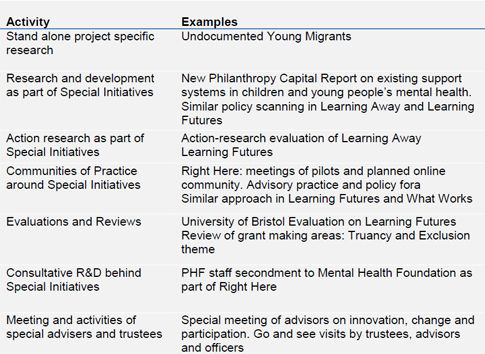 If you want to make sector-level change you have to twist the mainstream, bend it to your ends. You can’t work against it or compete with it or work outside it. This means changing the way the political elite thinks.

Strategic aim 5: Developing the capacity of organisations and people who facilitate aims 1-3

Capacity building consists of supporting organisations to improve their capabilities and thus to increase the effectiveness of their work. The Strategic Plan defines capacity building as support for:

These types of support can be found across the Foundation’s work but are a particularly important feature of Special Initiatives. Right Here uses peer mentoring. The Breakthrough Fund is primarily concerned with supporting individuals who are both catalysts for radical change in their organisations and at ‘turning points’ of their work. In each case there are dedicated structures and resources.

However, a great deal of less formal capacity building also takes place as part of the Open Grants process. This is referred to as ‘beyond grants’ and consists largely in sharing knowledge and information on either a one-to-one or group basis (e.g. through seminars or publications). Programme heads estimate that this activity takes up 15-30% of their time.

Stakeholders and advisers report that PHF officers, because of their sector knowledge, are particularly good at signposting grantees to other sources of funding, but also in helping them in the broader process of strategic and business planning. But at present there is no way of knowing the true impact of this work. The Grantee Perception Report suggests a potential problem with the current approach: with a great deal of attention at the beginning of the grant but much less at the ‘exit’ point. All of the other grant-making organisations consulted pointed to the importance of this type of support while emphasising the dedicated staff time and resources required – especially in a time of economic austerity, where other sources of funding are in shorter supply.

It’s a bit naïve to think you can do genuine capacity building as part of the open grant process – especially with the emphasis on innovation and developing new projects all the time. You have to put real time and money into it – like the Breakthrough Fund.

Strategic aim 6: Developing PHF itself to be an exemplary foundation, existing in perpetuity

Most of the individual objectives contained in the Strategic Plan have been achieved or are being actively pursued, from practical improvements to grant-making systems like the new online application process to the Grantee Perception Report and involvement in the Woburn Place Collective where the Foundation is taking a leadership position in its sector.

The Foundation is respected by its peers and partners, many of whom in the course of the review expressed admiration for the thinking behind the Strategic Plan. It is seen as an important ‘catalyst for change’ by stakeholders in the fields in which it works. These people appreciate the thoughtful way in which the Foundation goes about its business. Adjectives such as ‘precise’, ‘rigorous’ and ‘imaginative’ are commonly used in reference the Foundation. At the same time, there are critical friends in both camps who think that, while noble, the intentions expressed in the Strategic Plan about bringing about long-lasting change may be over-ambitious for the time-scale.

The sheer breadth of PHF’s work is not fully appreciated by stakeholders: a reflection on the speed at which the Foundation has expanded its operations but may also partly be a consequence of working through three distinct programmes. This underlines the need to be more active in communicating about the range of its activities to the full spectrum of those it is seeking to support and influence.

The new staffing and decision-making structures, the approach to Special Initiatives, as well as the outcome-based system for grant giving have greatly improved the effectiveness of the Foundation, though, as we describe below there is room to do more in promoting the outcomes if its work to key audiences.

By pursuing the Strategic Plan to its logical conclusion (by continuing on the path of ‘strategic philanthropy’) the Foundation will advance its reputation still further and move even closer to realising this strategic aim.

The grant to the Royal Opera House in 2007 – described below – should also be regarded as exemplary. Making a grant to endow an activity is the “holy grail” of foundation funding. Moreover, Paul Hamlyn’s name is linked to a prestigious building without PHF having to fund a capital project (which is contrary to PHF’s aims).

4.3 Additional objective agreed in 2005 (and not included in the Strategic Plan)

In 2005 as part of the development of the Strategic Plan, the trustees agreed an additional, private strategic aim. This was to make one major grant to fund a permanent memorial to Paul Hamlyn. They took the view that this would be exceptional as the ongoing work of the Foundation would be the main way in which Paul Hamlyn would be commemorated.

In May 2007 the Royal Opera House (ROH) and PHF announced a donation of £10m to establish the Paul Hamlyn Education Fund within the Royal Opera House Endowment Fund and the naming of the Paul Hamlyn Hall at ROH. The gift was made to permanently support the ROH’s community and education work, and the renaming was to reflect the 20 year relationship between Paul Hamlyn, the Foundation and the ROH. The endowment fund was used by ROH to start a new campaign seeking additional endowment donations.

The fund has enabled the ROH to innovate and sustain high quality community and education work.

In 2005 Trustees decided not to include the development of the India programme in the 2006-12 Strategic Plan but instead to address this through a stand-alone strategy which was to be produced in 2007. In 2007 PHF carried out a consultation exercise with its India grantees and the PHF consultant in India was given a sabbatical at the National Institute for Rural Development in order to spend time developing the Foundation’s plans.

Grant expenditure in India has trebled since 2006. A strategy published in 2007 commits the Foundation to building on its historical programme in important new ways: by extending the geographical spread of support outside the main urban areas and by working more closely with local structures set up through the National Rural Employment Guarantee Act (NREG). The strategy is being implemented as intended, both in terms of the geographical targeting and work on the NREG. The Foundation has established a Programme Committee with external advisers based on the UK model and has received permission to establish a liaison office, which opened in December 2009.

Staff and advisors express the view that there are two small overlaps between the India and UK programmes. Both programmes can learn from each other about the capacity-building and evaluation side of grant-giving. There may also be lessons to be drawn from India for the UK programme about participation and social justice. But the socio-economic and political contexts of the two places are so vastly different, that there is a limit to the synergies to be found and encouraged. Nevertheless the potential overlaps between the UK and India need to be considered as part of the Foundation’s future communication and improvement activities.